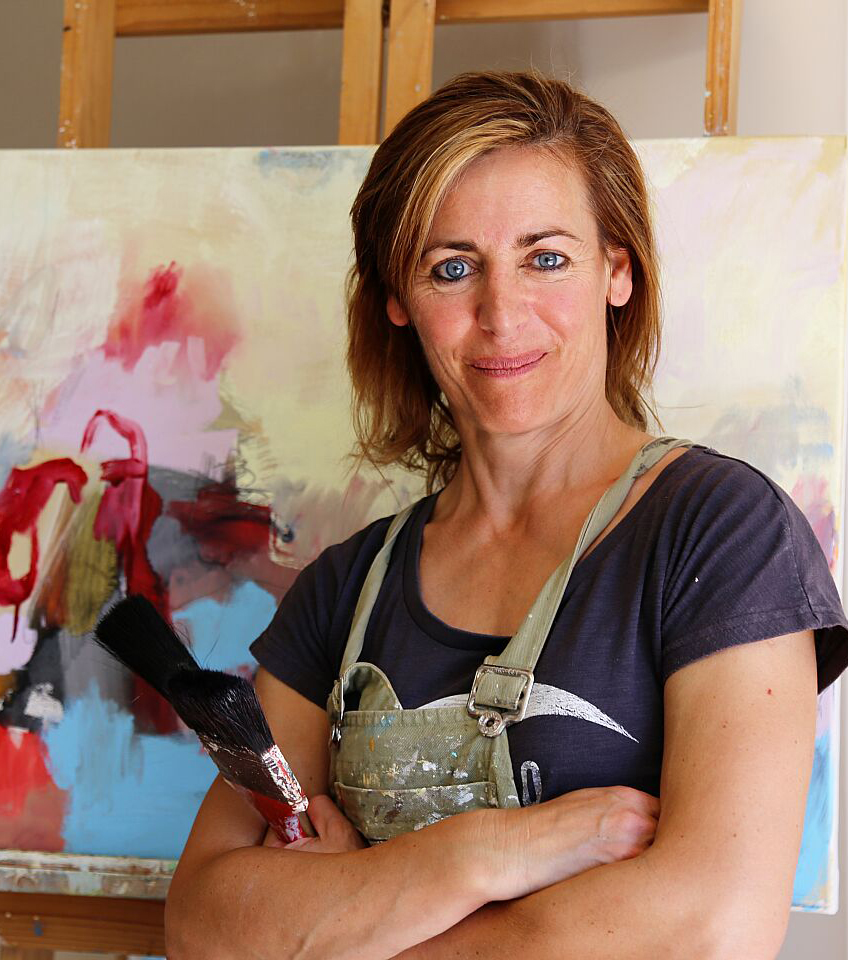 “As an abstract artist I’m interested in pursuing intelligent paintings that not only convey an energy and urgency, but that also have a considered structure created by using shapes, colours, forms and gestural marks. Painting for me is an opportunity to show the bare truth of what I see and feel about the world. I hope that in capturing these essences, my viewers feel a resonance in what they see in my work. “

Felicity O’Connor is a resident abstract artist in Sydney, Australia at Art Gallery on Darling, Balmain. Attending a Steiner School in Victoria as an adolescent, the creative influence there fed her passion for music and art. However, something was always missing…

Her tertiary education included an Arts degree at La Trobe University in Melbourne and then a Masters in Art Therapy at the University of Western Sydney. This led her into the field of psychology, completing her Post Grad from Charles Sturt University as a registered Psychologist.

She resisted the inner battle to be an artist for a long time, eventually giving in to it and delving into the world of life drawing for 3 years, but the stylistic qualities of abstract art was the genre that continually spoke to her spirit.

Like many of the abstract expressionist painters of the mid-21st century, Felicity generally uses acrylic and oils to explore line, depth and space to create her paintings. Depending on the creativity that overtakes her on the day, her mediums of choice can range from pencil, oils or acrylics on paper or canvas. Her heart and soul are given over to the work until it’s completed.

Felicity’s works are generally initiated from the environment around her. It can start with one or two vibrant colours that resonate with her. Painting daily within the microcosm of her home studio on the Central Coast of NSW, she will layer one main colour over another and ‘read’ the story using space, lines and shapes that reveal themselves to her.

Working with her canvas or paper on the floor allows Felicity to gain a certain freedom and spontaneity with the paint and mark making. This is important to the visual rhythm in the work and moves intentionally away from the traditional western perspective of a horizon line and closer to the Australian indigenous perspective which she finds more direct and energetic. She paints with an urgency and intensity, often using music in the studio to uplift her.

One of her greatest achievements was to be awarded a commission of 75 works for the Sir Norman Foster Building, ‘Lumiere’, Regents Place, Sydney in 2006.

As a trusted and committed women’s advocate for representation in the art world, she mentors women conducting Art Retreats at her studio surrounded by bushland and water views. She has the rare ability to bring out the inner soul of women allowing them to be who they are, learn, grow and create the art that is within them.

Owners of Felicity’s artworks have said that they love the colours, the composition and the ‘looseness’ of the lines. For those that have commissioned work, they often feel it’s so special to have a one-off, custom made work in line with the atmosphere they are trying to achieve.

If Felicity’s abstract artworks and style intrigue you, speak with her to learn more.

2016   ‘The Yellow Board’, Fundraiser for The Cancer Council. The Space Gallery, Sydney.

2011   ‘The Way We See It’, Group Exhibition, Gosford Regional Gallery.